Apple has delayed a new feature that will provide Apple Card users with the option to have their Daily Cash earnings deposited into a high-yield savings account. 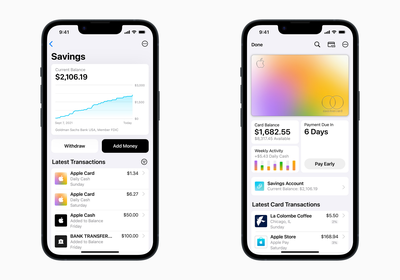 During the iOS 16.1 beta testing process, the feature was mentioned as a new Wallet app addition in the release notes for the Release Candidate version of the update, but in the notes for the final version of iOS 16.1, the mention is missing.

Apple announced plans for the Apple Card savings account in mid-October, and while the company did not provide specific information on a launch date in the announcement other than suggesting it would be available “in the coming months,” it was believed that the savings account would launch alongside iOS 16.1 given the mention in the RC notes for the update.

With no sign of the feature in iOS 16.1, it will now be coming at a later date. When Apple does implement the ‌Apple Card‌ savings account, it will have no minimum fees, no minimum deposits, and no minimum balance requirements. Apple will offer the account through ‌Apple Card‌ partner Goldman Sachs, but Apple has not yet said what the interest rate will be.

‌Apple Card‌ users will be able to manage their savings accounts through the Wallet app, and once set up, all Daily Cash will be automatically deposited.

iOS 16.1 for iPhone Launching on Monday With These 8 New Features

As expected, Apple today confirmed in a press release that iOS 16.1 will be released on Monday, October 24 alongside iPadOS 16 and macOS Ventura. iOS 16.1 includes at least eight new features for iPhone users, such as iCloud Shared Photo Library and Live Activities support in third-party apps on the App Store, along with several bug fixes. Below, we have recapped everything new in iOS 16.1…

The next two weeks will be fairly busy for Apple, with multiple new product launches, software releases, and more expected over that time. Below, we have recapped five key dates coming up for Apple so that you can mark your calendar accordingly. Key dates to remember:Monday, October 24: Apple confirmed that iOS 16.1, iPadOS 16.1, and macOS Ventura will be released on October 24, and it’s…

With this week’s announcements of new iPad Pro, iPad, and Apple TV models out of the way, attention now turns to the Mac. Rumors suggest Apple plans to launch new high-end MacBook Pro and Mac mini models with M2 series chips later this year. In his newsletter this week, Bloomberg’s Mark Gurman said the initial version of macOS Ventura launching on Monday, October 24 will include support for…

Largely in line with expectations, we saw a number of Apple product updates this week via press release with the iPad Pro, iPad, and Apple TV. All three products are available to order now with launches coming over the next couple of weeks. We also got official confirmation of release dates for macOS Ventura and iPadOS 16, while we’re still expecting some Mac-related updates before the end…

Apple today added several new accessories to its online store, debuting popular products from brands like Anker, Mophie, and Twelve South. The new Anker 3-in-1 Cube with MagSafe is a MagSafe-certified charging accessory that can charge the iPhone, Apple Watch, and AirPods all at once. Priced at $150, the Anker Cube is available in Apple retail stores as of right now, and it should soon be…

In an email to developers this week, Apple announced that app-related ads will begin appearing in the App Store’s main Today tab and in a “You Might Also Like” section at the bottom of individual app listings starting Tuesday, October 25, in all countries except China. All ads in the App Store have a blue background and an “Ad” icon. ”With a Today tab ad, your app can appear prominently on…

[ad_1] The gaming industry has come a long way. From its simple, two-dimensional debut in the 1970s and 80s, gaming has kept pace with the rapid evolution of digital technology,…